About two months ago, the length of my hair reached my waist.  It also took me two good years to grow it to such length.  But one day, I grew tired of it and decided to chop it off to a bob.  Some of my officemates were surprised to see what I had done, but were nonetheless amused by my new look.  I was ok with it for a while but fixing it (like ironing it or meticulous blow dry to attain that cute bulb shape) had become a hassle for me.  It was just a time consumer.  I also did not want to have my hair poking my eyes anymore whenever gale force winds blew!  So I decided to have it shorten again 6 weeks after my first haircut.

How short is the new haircut?  Well, let’s put it this way.  It’s so short that

I’m not new to short hair but this is by far, the shortest I’ve sported.  And it’s just so freeing!  I mean it’s so low maintenance.  I love it!  And although violent reactions have been thrown at me since I have it cut, I don’t really care! 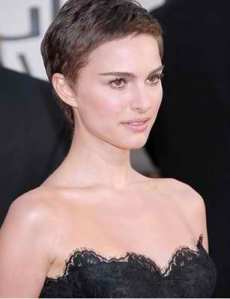 natalie portman's hairstyle was my peg.

Everyone I know was shocked when they first saw me.  And everyone asked me questions like “What happened”?” or “Why did you do it?”  Everytime I told them the truth, they would doubt my reply, as if they knew the “real reason” behind my action.   2 students of mine, (Korean university students), offered their view on why women cut their hair as short as mine – that usually this was a reaction to a punishment or to a just ended relationship.  Or perhaps these women were rebelling against something/one.  They even suggested one possible reason was that these women were coming out of their closets!  I told them that all of their reasons were not applicable to me and no, just because women cut their hair that short, did not mean that they had betrayed their gender role! A woman can be drop dead gorgeous and be a lesbian at same time.  Hair’s got nothing to do with sexuality! Just as a lot of men grow their hair really long but it doesn’t mean that they’ve turned gay.  I know a lot of men who are so freakishly handsome and “manly” but are actually gay (which is a rather sad fact for a lot of women out there!)

Another instance occurred with a co-worker of mine.  She asked me if I was depressed and when I answered “no” and told her the truth, she told me that I didn’t have to tell her such things anymore and just go ahead and spill the truth.  I was like, “Listen.  That’s the truth!”

It’s really funny how sometimes people demand the truth but would rather come up with their own version of the truth and deny the “real” truth just to satisfy their thirst for the truth!  This whole thing kind of reminds of a Jack Nicholson line from A Few Good Men and this is I think what I ought to say to the next person who’d ask me why I cut my hair:

Nicholson: “You can’t handle the truth!!!”

People have made my new hairstyle hair into something complicated.   It’s not as if I did something extremely shocking like had my entire body tattooed or scarred.  Or went under the knife to get myself a new nose.  Or even got my head shaven.  I just got a haircut.  A really short hair cut.  It’s as simple as that.

Someone asked me if I would let my hair grow again or just keep it this way forever.  I told her that I would grow it out and “be a girl again – all prim and proper.”  But for now though, I’ll enjoy “being a lesbian!”

* a conversation I’ve had earlier today reminded me of this blog entry I had written 3 years ago.   and yes, the title was inspired by Weed’s “Long Hair.”  Feel free to sing the title to the tune of that song! 😉